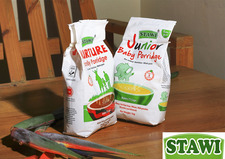 Stawi Foods and Fruits Limited, a Kenyan-based agro processing company specializing in the milling of grains into composite porridge flour blends that are pre-cooked and fortified. The company was founded by Eric Muthomi in 2012 with its premier products targeting babies, children and entire households and with an input material supply base from small holder producers and grain traders. The company’s leading brands are Stawi Junior Baby Porridge and Stawi Family Porridge, which have primarily been distributed through mainstream retail outlets across major Nairobi suburbs and neighboring Counties. Stawi Junior Baby Porridge is a unique mix of millet (wimbi), soya, wheat and milk powder, fortified with Vitamin A, while Stawi Family Porridge is a blend of millet (wimbi), maize, amaranth, sorghum and also fortified with Vitamin A.

Kenya is a signatory to the Sustainable Development Goals (SDGs) with some of the goals including ending poverty in all its forms everywhere as well as ending hunger, achieving food security and improved nutrition as well as promoting sustainable agriculture. Chronic malnutrition unfortunately still poses a major challenge to the country’s most vulnerable who include pregnant women and children owing to limited access to affordable and nutritious food rich in vitamins and minerals. This exposes them to opportunistic illnesses and disease. It is estimated that as many as 35,000 Kenyan children die each year as a result of malnutrition. The scale up and promotion of programs that aim to improve access to food rich in vitamins and minerals reportedly have the potential to generate an additional 200 billion Kenya shillings to the country’s GDP annually. This has created an opportunity for food manufacturing enterprises like Stawi to research and develop products that will not only bridge the nutrition deficiency challenge but also create business opportunities that will enable them to profitably manufacture nutrient rich cereal-based products.