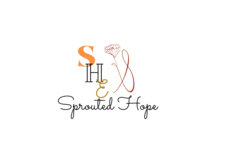 Sprouted Hope (SHE) is a not-for-profit organization that is based in, Shauri Moyo Kisumu, Kenya and Moiben in Uasin Gishu. It was formed by lived experts in teen motherhood and mental health.

We are self-driven in curbing teen pregnancies, reducing HIV infections and promoting mental wellness. We are woman-led, youth-led and user-led organization.

We use Human Rights based approach; in curbing teen pregnancies, educating teen girls on Peace, Sexual and Reproductive Health and Rights (SRHR), and promoting mental wellness. At SHE, we mentor and empower the teens in a participatory approach to give them opportunity to get exposure have role models and retain the teens in school.

At 16 years Tula who is the founder of Sprputed Hope gave birth to a son and was rejected by the community, family and the father of the child.

This didn't stop her from having the dream to finish school and accomplish her goals. She went back to school and managed to go to university which the government paid majority of her school fees.

From the challenges she encountered she decided to form a not for profit organization that will empower teenage mother and give them a second chance in life, and this organization will also empower other teenagers to help reduce the number of teenage pregnancy, use of drugs, hiv infections and suicide cases amongst teenagers.