Based in United Kingdom 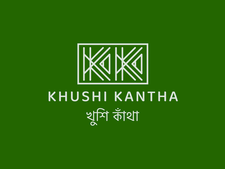 Khushi Kantha ('Happy Blanket'):
- empowers struggling mothers from the communities hosting the Rohingya refugees in Cox's Bazar, Bangladesh to provide for their children with dignity; and
- contributes to the circular economy, promoting a shift from ‘take-make-waste’ to ‘reclaim-repurpose-reuse’.

We do this by creating ultra-soft, ethically-produced multi-purpose baby 'kantha' blankets. Hand-stitched from reclaimed cotton, each one has a unique story attached.

Once best-known for having the longest unbroken stretch of beach in the world, the coastal town of Cox’s Bazar in South-Eastern Bangladesh is now infamous for another reason.

Despite being one of the poorest parts of a very poor country, the local population have welcomed nearly 1 million Rohingya men, women and children, who have fled across the border from Myanmar to escape human rights atrocities.

While humanitarian agencies focus on providing support for the Rohingya refugees, the host community are struggling with falling wage rates, depleted natural resources, crippling inflation and other devastating impacts on their already precarious incomes.

With child malnutrition rates similar among the refugees and the local people, while working in the refugees camps I witnessed destitute mothers from the areas surrounding the camps begging for some of the food aid provided to the Rohingya population, only to be turned away.

Having spent nearly a year based in Cox’s Bazar, I came home to London just over 20 weeks pregnant with twin daughters, instilled with a strong sense of wanting to do something to help the mothers I had seen experiencing such desperation – but didn’t know how to go about it effectively.

When my daughters were born, they were gifted a collection of more than twenty ‘kantha’  blankets, lovingly created by my Bangladeshi mother- and sister-in law, with help from the wider community.

I was a bit overwhelmed to receive so many and wondered what we were going to do with them all!

However, I soon realised they could be used for pretty much every task on my daily to-do list as a Mum! Their bright colours and traditional ‘kantha’ stitching makes them really stand out, and they draw compliments wherever we go.

I quickly realised there could be a market for them!