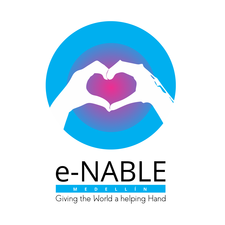 Founded in May 2017, e-NABLE Medellín is a non-profit organisation in Colombia with big ambitions: to use the power of 3D printing to help victims of the country’s landmines, and others in need, by providing free, personalised, prosthetic limbs.

Until the ratification of its peace treaty in December 2016, Colombia had endured a 52-years civil war, during which countless landmines were laid throughout rural areas of the country with devastating effects.

In 2014, Colombia ranked the second most mine-affected country in the world to Afghanistan, and over 11,400 people have been victims of landmines since 1990, 1,124 of whom are children.

Over 3,600 people have suffered amputation due to the conflict, and 26% of ex-combatants have amputations. While many of those we aim to help have suffered their disabilities due to the armed conflict, we also create prosthetics for children and adult with birth defects.

Whilst mine clearance operations are in progress, at e-NABLE Medellín we’re focused on supporting victims of those landmines, as well as other people in need, by producing 3D printed prosthetic limbs, which we provide for free. Working with local doctors, students and engineers, by using 3D printing technology we not only save on costs, but are able to produce quality prosthetics in just 2 weeks. In addition to this, we can personalize designs however the recipient would like, whether that’s to look like a Disney princess, to show off their football team’s colours or just to have a subtle design that matches their skin tone. e-NABLE Medellín isn’t just about helping victims return to their normal lives and regain their independence; it’s about boosting their self-confidence and helping them to reintegrate into
wider society.

Be Selected as a Global Fellow in Our Institute

Our career change program for those looking to learn more about social enterprise, human-centered design, and career opportunities in the social impact sector. Join an in-person training, stay connected as a virtual cohort for the 6 months of Fellowship, and go Experteering to build your experience.